July Bloedel Bird of the Month 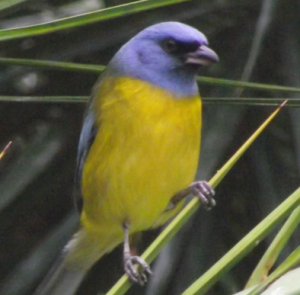 Identifying birds can be hard. Start with the basic colours, shape and size. This bird is blue and yellow, so ‘blue and yellow’ may be part of the name. It is larger than most finches and waxbills, but smaller than parrots and macaws, and is not a raptor. It is a Blue-and-yellow Tanager.

The ‘Tanager’ part of the identification is by comparison with other tanagers. This is a large family of birds from the Americas. There are around 240 species of Tanagers, but the number is not set in stone, as closer examination reveals differences.

The Blue-and-yellow tanager has the scientific Latin name of Pipraeidea bonariensis.[1] The males of the first group of these birds described, in 1789, have a black back. 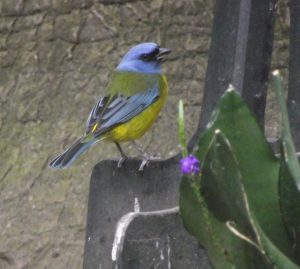 The bird shown in the photograph has a green back. The differences from Pipraeidea bonariensis are enough to regard it as a separate species, the Green-mantled Tanager. The official name, Pipraeidea darwinii, from 1838, honours the naturalist Charles Darwin.[2] While the green back is the most obvious difference between the two species, there are other significant differences.[3]

As a guide, if a bird is relatively dull in colour and well camouflaged, then it is probably a female. Sometimes the female colours are totally unlike those of the male. Often there is a resemblance with the female plumage being much duller or more muted than that of the male. Generally, the colour patches on the female are on the same parts of the body as those of the male.

Usually considered conspecific with P. bonariensis, but differs in its (in male) olive-green vs black mantle, back, scapulars and chest side; yellow vs flame-orange breast and rump; (in female) bluer crown, wings and tail; more olive-yellow underparts and rump; and song with lower-pitched notes in narrow frequency range.

Bloedel Conservatory has two Blue-and-yellow tanagers, a male and a female. 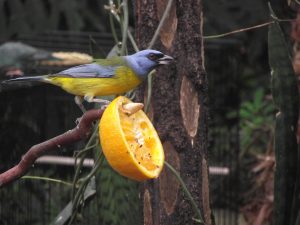 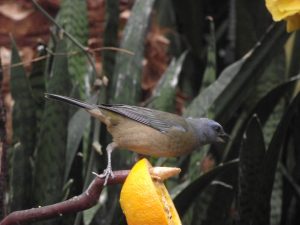